Home / All Posts / Blog / Sitting President Seeks Prior Restraint of... 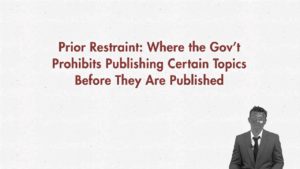 In yet another demonstration of his open contempt for the rule of law, attorneys for President trump have demanded that Holt & Co. refrain from publishing an upcoming book.  Following yesterday’s publication of an excerpt in New York Magazine, his attorney “demands that you immediately cease and desist from any further publication, release or dissemination of the Book, the Article, or any excerpts or summaries of either of them, to any person or entity, and that you issue a full and complete retraction and apology to my client as to all statements made about him in the Book and Article that lack competent evidentiary support.”

Ignoring the stunning hypocrisy of such a demand from a man who spent years in a racist hoax claiming that our sitting President was Kenyan only to abandon the claim when it was no longer politically expedient, such a demand represents prior restraint, or an official government restriction of speech prior to publication.  Such restraints are presumptively unconstitutional violations of the First Amendment’s free speech protections.  Indeed, the US Supreme Court has called prior restraint “the most serious and the least tolerable infringement on First Amendment rights.”

In 1971, the Supreme Court declined to accept national security as justification for prior restraint, and in 1976 Justice Burger explained in Nebraska Press Association, prohibition of publication of a criminal defendant’s confession prior to his trial was similarly unconstitutional.  Here, the President seeks to prevent publication of a book (which he has not read) because he doesn’t like what it might say about him.

Oh, and he wants an apology as well.

Obviously, there is no legal merit to an extravagant demand that others forfeit their First Amendment rights because they might bother someone.  This President is unhinged.