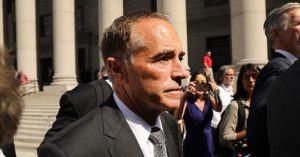 Chris Collins (R-27) was arrested on Wednesday, August 8, 2018 following an indictment by a federal grand jury alleging insider trading.  After initially vowing to continue his campaign, Collins quickly changed course. He maintained that while he would not resign his seat, he would “suspend his campaign.”  Faced with the prospect of a candidate under indictment, local GOP officials began to talk of “replacing him” on the ballot and holding conspicuous,  serious-sounding summits to name a candidate.

Can they, though? What does the federal and state law say about replacing a congressional candidate after he was nominated by his party and does not have a primary election opponent?

In order to decline a nomination to an office, New York election law 6-158(2) requires filing a certificate of declination of designation “not later than the fourth day after the last day to file such designation,” NY Election Law 6-158(2). That day, April 16, 2018, passed without incident; he had no primary opponent.  So, since declining the designation as the GOP candidate for New York’s 27th Congressional District isn’t possible, how can he be removed from the ballot?

The law allows only three (3) ways.  First, he could die. Suffice it to say no one wants that.

Second, could he move out of state, perhaps to his Florida home, as the US Constitution’s sole requirement for Congress is that she be an “inhabitant of the state on election day.”   Unfortunately for the GOP the federal courts have ruled on this issue in 2006 when Congressman Tom DeLay of Texas resigned after his Chief of Staff gave evidence that the Congressman was running a criminal enterprise from his offices.

DeLay had sought to the state Republican Chair declare him ineligible by moving from Houston to his condominium in Virginia. But the federal district court said that would not make him ineligible because the requirement under the Constitution is whether DeLay is an inhabitant of Texas on election day. Contradicting evidence raised questions about whether DeLay planned to remain a resident of Virginia, but he said that did not matter because DeLay could not say where he would be on election day.

The court held that “declaring DeLay ineligible at this time would amount to a de facto residency requirement in violation of the United States Constitution.” DeLay appeared on the Nov. 7, 2006 ballot as the GOP nominee. The Court said DeLay could “withdraw” from the race under Texas election law, but that still would not allow the Republicans to replace him on the ballot.  The Fifth Circuit affirmed.

The GOP elders in the NY 27th matter could argue that the facts in the Collins case are distinguishable from the DeLay matter and that the reasoning preventing substitution simply doesn’t apply.  Given the fact that the Congressman is under indictment and free on $500,000 bail, however, it would be difficult to argue that he enjoys such unfettered freedom to move residences from state to state at whim.

So, the public discussion has been surrounded by speculation that the GOP will essentially run Collins as a sort of “sham candidate.”  He will be nominated for some lesser office in which he has no interest in the hopes that doing so will free the line for another candidate.  It is an interesting scenario, and it is one without clear precedent in New York.  There is some appellate discussion, however, on the issue of dual designation.

In 2013, Tom Irish was the Independence Party’s nominee for Town Councilman when that party’s nominee for County Legislator timely declined his nomination. Mr. Irish was nominated for that office and he filed an acceptance for that higher office. The problem was he never filed a certificate of declination for the Town Councilman race. The Supreme Court, Fourth Department, found this to be a “fatal defect” to his County legislator nomination and held Mr. Irish was not disqualified from the designation for Town Councilman by virtue of his subsequent designation for County Legislator. The Court said:

This does not bode well for the GOP. The Court made it clear that when a candidate seeks to disqualify himself from an office for which he was nominated but did not timely decline, he “must present a legal basis for doing so” other than being nominated for a different office. The Court, refusing to act as “activist judges” and fashion a political solution (removing Irish from the Town Councilman ballot) not written in the Election Law, simply let the Town’s decision not to put him on the County Legislator ballot to stand.

There simply is no “legal basis” for removing a sitting, party-nominated Congressman by fraudulently inserting him as a sham candidate in a Town election because he is politically compromised by a federal, criminal indictment.

Absent an unprecedented legal interpretation of election law, Chris Collins will have to remain on the ballot.