Home / All Posts / Uncategorized / The Law is Clear: The White House Cannot...

The Law is Clear: The White House Cannot Simply Revoke Press Passes at Will

The Law is Clear: The White House Cannot Simply Revoke Press Passes at Will 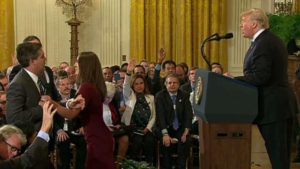 On November 7, 2018 the White House revoked CNN White House correspondent Jim Acosta’s press pass, effectively barring from doing his job.  While the grounds for doing so are based on a doctored video I want to focus on the legality of what happened. May the White House simply revoke press passes at will, as it did with Acosta? Legal precedent makes it clear that it cannot.

In 1977 the DC Circuit considered a similar case when Robert Sherrill, a reporter for the left-of-center The Nation was denied a press pass by the Secret Service without explanation. He sued, arguing a First and Fifth Amendment violation and the DC Circuit ruled in his favor.  The Court noted that the issues were an absence of objective criteria for when passes may be denied and the lack of procedural due process — notice and the opportunity to be heard. The Court said:

In our view, the procedural requirements of notice of the factual bases for denial, an opportunity for the applicant to respond to these, and a final written statement of the reasons for denial are compelled by the foregoing determination that the interest of a bona fide Washington correspondent in obtaining a White House press pass is protected by the first amendment. This first amendment interest undoubtedly qualifies as liberty which may not be denied without due process of law under the fifth amendment.22 The only further determination which this court must make is “what process is due,” Morrissey v. Brewer, 408 U.S. 471, 481, 92 S.Ct. 2593, 33 L.Ed.2d 484 (1972).23 We think that notice to the unsuccessful applicant of the factual bases for denial with an opportunity to rebut is a minimum prerequisite for ensuring that the denial is indeed in furtherance of Presidential protection, rather than based on arbitrary or less than compelling reasons. See Greene v. McElroy, 360 U.S. 474, 496-97, 79 S.Ct. 1400, 3 L.Ed.2d 1377 (1959); Mullane v. Central Hanover Bank & Trust Co., 339 U.S. 306, 314, 70 S.Ct. 652, 94 L.Ed. 865 (1950); Grannis v. Ordean, 234 U.S. 385, 394, 34 S.Ct. 779, 58 L.Ed. 1363 (1914). The requirement of a final statement of denial and the reasons therefor is necessary in order to assure that the agency has neither taken additional, undisclosed information into account, nor responded irrationally to matters put forward by way of rebuttal or explanation. This requirement also will avoid situations such as occurred in the case before us, where an applicant does not receive official written notification of his status until more than five years after the status decision is made.24

So the rule of law is clear. Reporters have a property interest in their press pass and it cannot be taken without grounds based on transparent, objective criteria accompanied by notice and the opportunity to be heard. These are the same reasonable, minimum standards that apply to your driver’s license and prevents a police officer from confiscating it on the side of the road without explanation.

My Conversation With Caroline Fredrickson About Her New Book "The Democracy Fix."